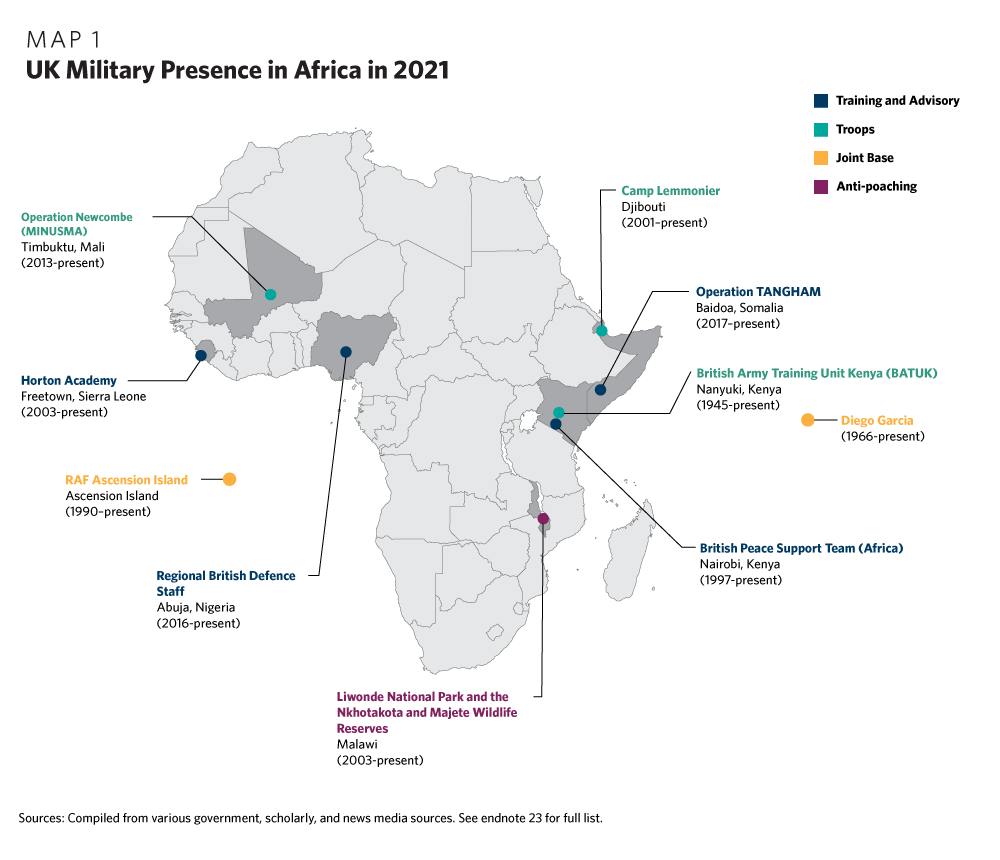 In a more contested multipolar system, the UK is positioning itself to assert its relevance among the great powers of the twenty-first century and may want to count on supporters in Africa. In its quest to maintain “international order,” according to the integrated review, the UK will seek to carry out “regulatory diplomacy,” “[science and technology] diplomacy,” “cyber diplomacy,” and other kinds of diplomacy to bring countries on board.26 African governments should be prepared for involved and even fraught negotiations between global powers that may play out on the continent. Of course, African countries have experienced this kind of tension before, when they had to contend with Africa’s place as a battleground in the Cold War between East and West. This militaristic competition in a multipolar world may exacerbate conflict in hot spots in Africa if global players funnel resources into different parts of the political spectrum on the continent. This trend has already been displayed with the deployment of Russian mercenaries in Sudan and the Central African Republic and of French special forces in the Sahel.27 It may also be possible for some countries to leverage any potential allyship with the UK for tangible commercial investments and economic engagements, as African countries have done in partnership with France and the United States.28
“In the decades to come [the Indo-Pacific region] will be the crucible for many of the most pressing global challenges—from climate and biodiversity to maritime security and geopolitical competition linked to rules and norms.” —“Global Britain in a Competitive Age: The Integrated Review of Security, Defence, Development and Foreign Policy,” 66.
As the UK prepares for multipolar competition, the non-Western region most central to its interests will not be Africa but Asia, specifically the Indo-Pacific. Indeed, a new phrase has entered the foreign policy lexicon in the UK: “Indo-Pacific tilt.” China is clearly the focus of this tilt, but Australia, India, and Southeast Asia also feature. According to the integrated review, the UK wishes to be the key European partner in this region, with a focus on economic opportunities, security, and the values of an open society. In its 2022–2026 strategy announced in November 2021, the CDC Group will “pivot to Asia and, in particular, South East Asia.”29 In this geographic pivot to Asia and the Caribbean, CDC will also provide investments in Africa.
Nevertheless, some African economies could be of interest to the UK government. The document notes that “our future prosperity will be enhanced by deepening our economic connections with dynamic parts of the world such as the Indo-Pacific, Africa and the Gulf” (emphasis added).30
East Africa and the major African economies seem to be of interest, but there does not appear to be a vision for the continent. The subregion East Africa may be relevant to UK foreign policy because of concerns about insecurity and terrorism spilling over via Europe. The large African economies are important for economic and geopolitical reasons: the review asserts that “we will work in partnership with South Africa, Nigeria, Kenya, Ethiopia and Ghana in particular to further our shared prosperity goals, our democratic values and our security interests.”31 Four of those countries are among the UK’s largest trade partners on the continent (see map 2). 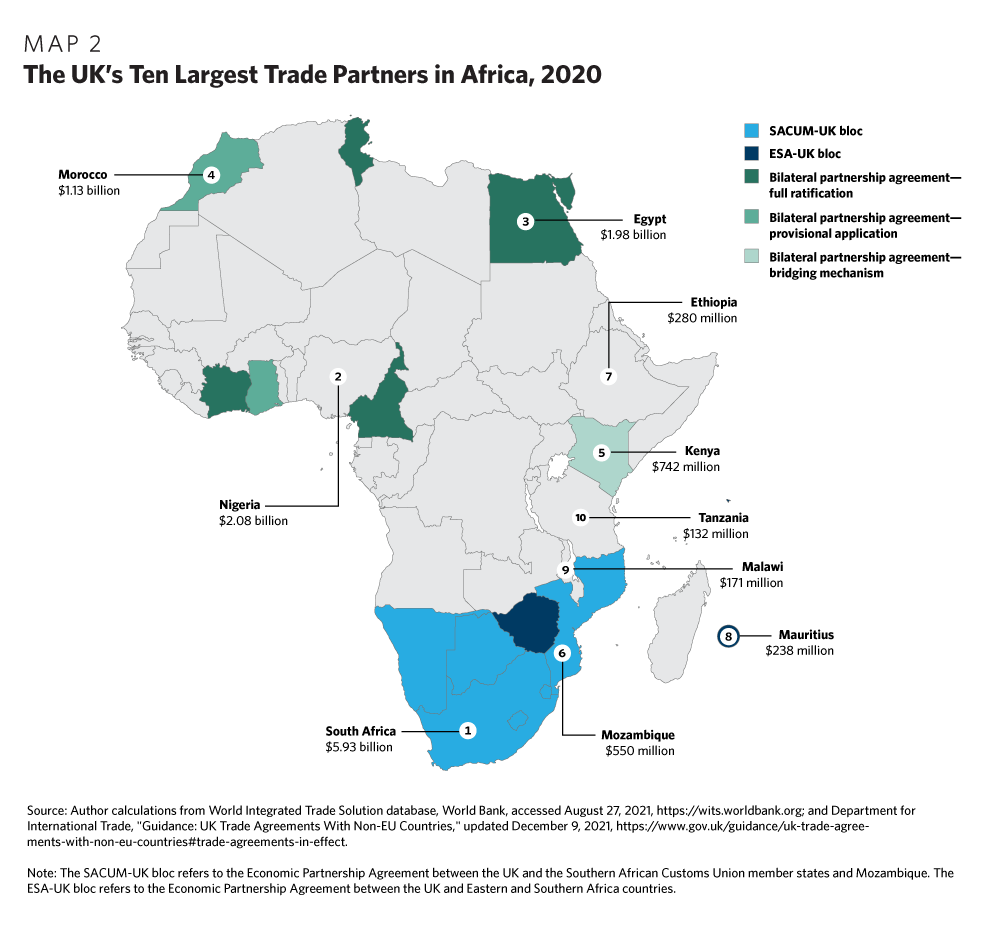 Where Africa is mentioned in the review, it is to advance the UK’s strategic geopolitical interests with limited consideration of the continent’s own economic development priorities. While Johnson has stated that he wants the UK to be the “investment partner of choice” for Africa, the reality may play out differently.32 Although the UK has trade deals with sixteen out of fifty-four African countries, overall trade with Africa has been declining (see map 2). Trade peaked in 2012 at $43 billion, but fell to about one third of that amount, $14 billion, in 2020 (see figure 1). The UK was also the first non-African country to formally commit to supporting the African Continental Free Trade Area agreement, signing a memorandum of understanding in September 2021.33 Yet the integrated review identifies “poor governance and disorder, particularly in Africa and the Middle East” as factors in rising terrorism and extremism, specifiying the Horn of Africa, Ethiopia, and Kenya as sites for investment in regional stability and defense cooperation.34 The tilt toward Asia in the review implies that Africa might struggle to be heard in the next decade even as the continent seeks to leverage trade for its economic transformation. While other continents are seen as growing economic partners, Africa could again be relegated to the periphery of UK commercial partnerships and investment decisions. 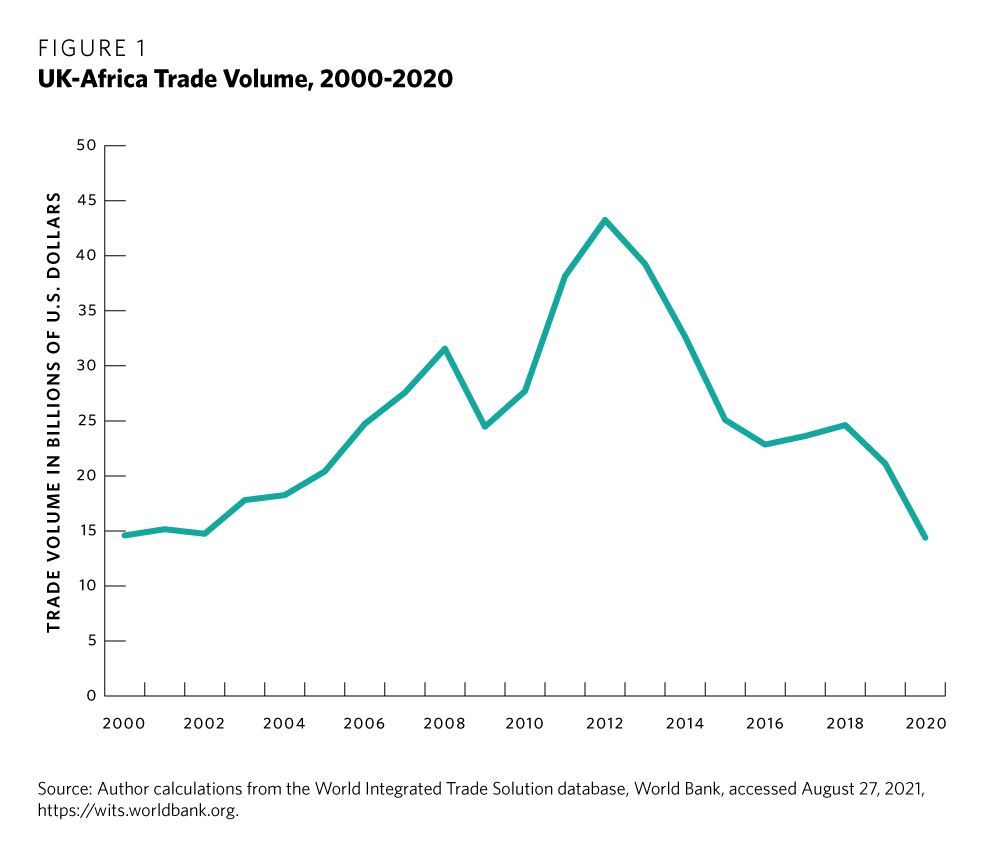 “In 2021 and beyond, Her Majesty’s Government will make tackling climate change and biodiversity loss its number one international priority.” —“Global Britain in a Competitive Age: The Integrated Review of Security, Defence, Development and Foreign Policy,” 32.
In a profound shift, the UK’s top international development priority is now to address climate change and other transnational challenges; poverty reduction has been downgraded. The UK’s decisions to abolish DFID and reduce the budget for ODA—buttressed by explicit expressions of national self-interest in the integrated review—indicate a narrower scope for international development and a reprioritization of focus areas. The UK’s international development priorities will be more fully laid out in a global development policy paper slated for later in 2022. However, in the review itself, climate change and biodiversity are strategic international priorities. These are followed by other transnational challenges that the UK aims to focus on—including health security, migration, illicit finance, and terrorism—and areas crucial to its national interests, such as science and technology trade and cybersecurity.
For African countries, this change will likely result in decreasing development engagement from the UK. The UK government claims that it “will maintain our commitment to Africa, with a particular focus on East Africa and on important partners such as Nigeria, while increasing development efforts in the Indo-Pacific.”35 Yet if ODA cuts persist beyond 2021, the UK’s bilateral aid to Africa—of which about 66 percent was cut in 2021—may never recover.36 At best, it will be funneled more narrowly, with girls’ education and environmental sustainability at the top of the UK’s stated development priorities. The implications could be profound, because Africa receives the largest proportion of UK bilateral ODA allocated to a specific region.37 In 2019, the continent received 50.6 percent of UK ODA ($3.8 billion) compared with Asia’s 41.8 percent ($3.1 billion), the Americas’ 4.1 percent ($311 million), Europe’s 3.2 percent ($240 million), and Oceania’s 0.3 percent ($20 million) (see figure 2). Five of the top ten recipients of UK ODA are African countries: Ethiopia ($382 million), Nigeria ($330 million), South Sudan ($265 million), the Democratic Republic of Congo ($236 million), and Somalia ($224 million). 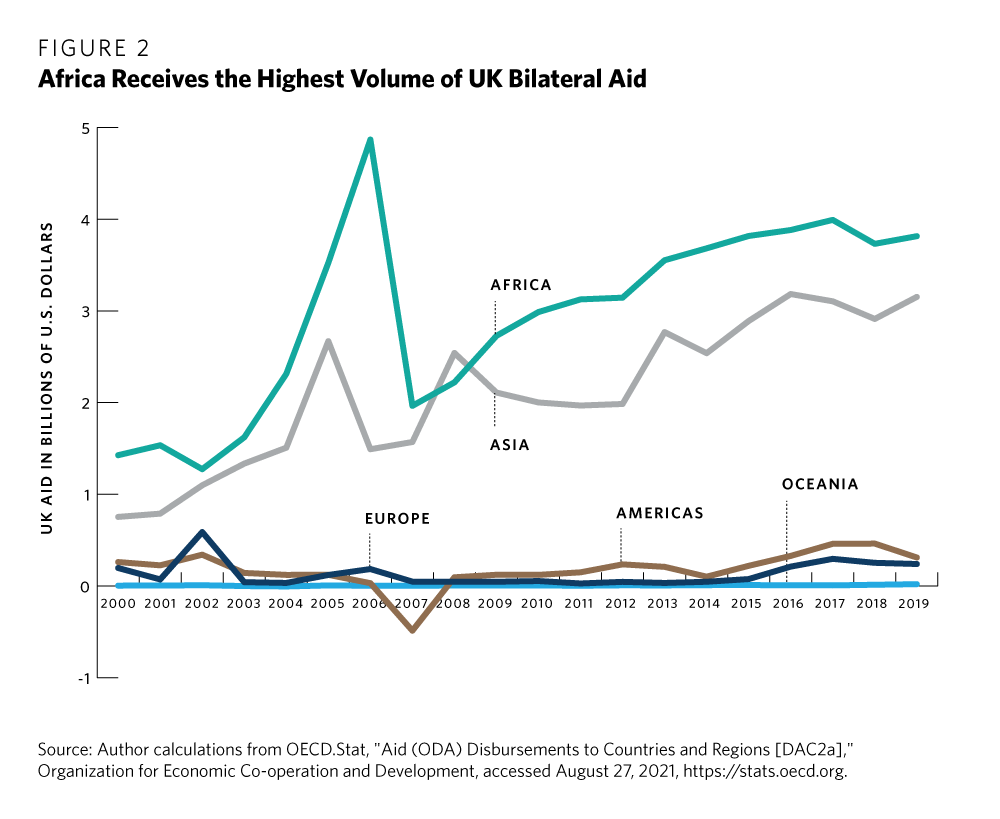 Africa should expect less concessional and grant financing as more countries graduate toward middle-income status, although other kinds of financial flows could increase. The integrated review explicitly acknowledges this eventuality: “As governments become able to finance their own development priorities, we will gradually move towards providing UK expertise in place of grants and using a variety of financing models to tackle regional challenges in our mutual interests.”38 In theory, reduced ODA flows (either from budget cuts or from the transition to middle-income status) should not foreclose other avenues for development engagement through technical assistance around trade facilitation, support for localization of value chains, and knowledge transfer in specific industries where the UK has a comparative advantage. Climate finance could be another area where the UK devotes considerable resources. Between 2011 and 2017, nearly 5 billion British pounds of UK foreign aid have been spent on 284 climate change projects, with Africa receiving the most regional funding at 826 million pounds.39 The UK hosted the UN Climate Change Conference, the UK’s largest-ever diplomatic summit, in November 2021 in Glasgow.40 CDC plans to devote up to 2 billion pounds (over $2.7 billion) per annum of investments in climate finance, green infrastructure, and digital transformation in the Indo-Pacific and the Carribbean, mainly, but also in some parts of Africa.41 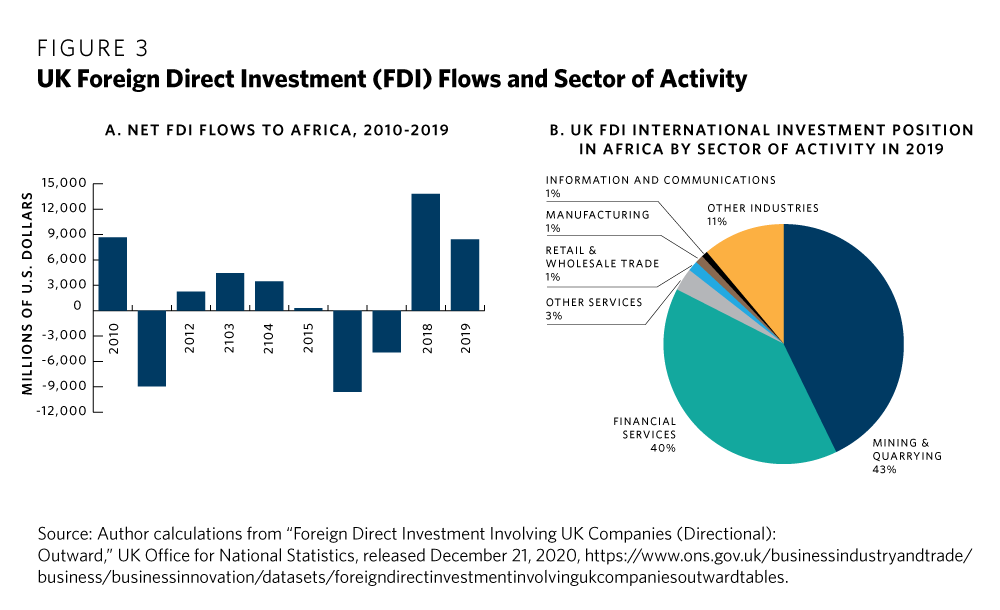 Finally, as concessional financing declines, UK commercial investments in Africa could rise. British private investment flows to Africa have been growing. UK investors accounted for the second-largest FDI stock in Africa of $66 billion in 2019, an increase from $58 billion in 2015, according to the UN Conference on Trade and Development.42 Net UK FDI flows to Africa bounced back from years of contraction to nearly $14 billion in 2018 (a decade-high) and $8 billion in 2019 (see figure 3a). Yet nearly 83 percent of UK FDI stock in Africa is to be found in financial services and the extractive industries of oil, gas, and mining (see figure 3b). Meanwhile, industries such as manufacturing, information and communications, agriculture, construction, and electricity each account for 1 percent or less of total FDI stock in Africa. These latter industries with job creation and transformation potential represent future growth areas in which to attract private investments from UK companies.
“Our aim is to have secured our status as a Science and Tech Superpower by 2030, by redoubling our commitment to research and development, bolstering our global network of innovation partnerships, and improving our national skills—including by attracting the world’s best and brightest to the UK through our new Global Talent Visa.” —“Global Britain in a Competitive Age: The Integrated Review of Security, Defence, Development and Foreign Policy,”4.
The UK identifies “sustaining strategic advantage through science and technology” as one of its four overarching foreign policy objectives for the next decade.43 This priority placed on leadership in science and technology is driven by the UK’s desire to maintain strategic advantage in a competitive multipolar system. The document’s reiteration of the need to prevent “corruption, manipulation, exploitation or the theft of our intellectual property” anticipates the UK’s eventual position on COVID-19 vaccines and intellectual property at the WTO.44 The UK is one of the countries that blocked proposals at the WTO to temporarily waive intellectual property rights on COVID-19 vaccines at the height of the pandemic, despite the potential of such a measure to help scale up vaccine production around the world.45
In advancing science and technology for strategic advantage, several tools akin to industrial policies will be employed. A “whole-of-UK effort” is proposed in which the government would develop the infrastructure; create the enabling environment for an ecosystem of scientists, researchers, business, and regulators; and work alongside the manufacturing industry to commercialize innovations.46 The UK also aims to attract top global talent to advance the goal of becoming a tech superpower. Through a newly established Office for Talent, the government will focus on high-skilled immigration for top scientists, researchers, and innovators from around the world. High-skilled migration will be achieved through a Global Talent Visa targeting established professionals and a new Graduate Route for international graduates to secure skilled jobs in the UK.47
The UK’s interest in attracting top global talent to become a science and tech superpower creates opportunities and uncertainties around its migration policy for African countries. While the government is clearly prioritizing high-skilled migrants, the fate of other forms of migrants—such as asylum seekers and refugees—is not clear. The promise of a welcoming environment for top talent regardless of nationality confronts the reality of hard borders as the UK visa program remains arbitrary, expensive, time-consuming, and humiliating, especially for Africans. A recent report commissioned by the All-Party Parliamentary Group for Africa found that African nationals seeking to visit the UK for professional or business reasons experience a high level of visa refusals.48 Between September 2016 and September 2018, the refusal rate that African nationals experienced for UK visit visas was 27 percent, over double the average of 12 percent and much higher than the Middle East’s 11 percent, Asia’s 11 percent, and North America’s 4 percent.49 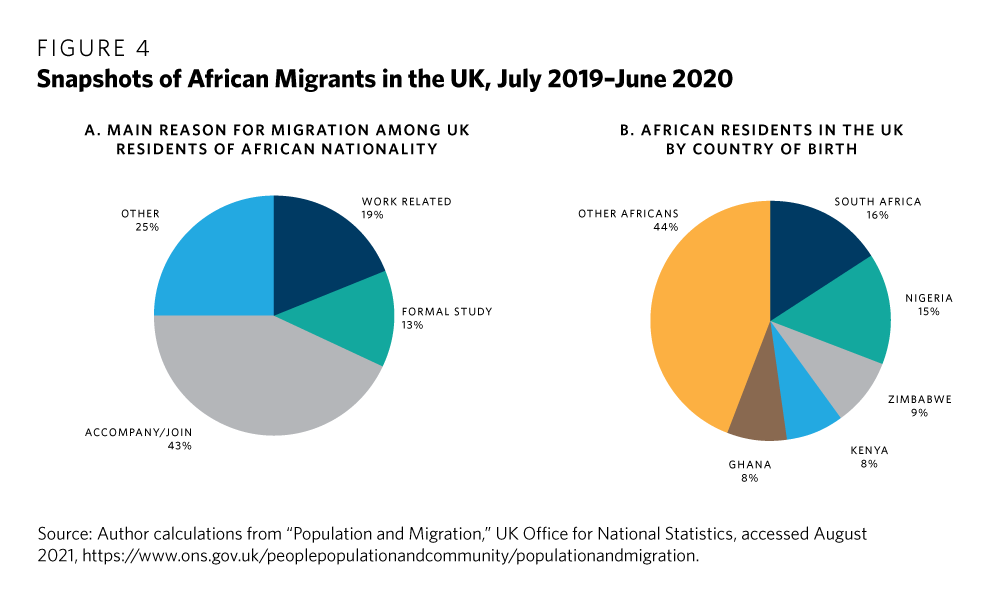